The January 8 shooting in Arizona was a tragedy. A democratic society cannot condone political violence, and all sides of the political spectrum quickly condemned the attack. Yet, instead of uniting people, this event had a polarizing effect on a nation struggling to reach a political consensus on a just about every issue. The left blamed this attack on right's fiery rhetoric, and the right deflected such attacks by making them seem like an assault on the First Amendment. On the other hand, the right distanced itself from some who have made the most vitriolic pronouncements and blamed the usual "liberal agenda" for a degrading society.

A less personal, but also tragic event is now unfolding in Wisconsin. In a democracy a legitimately elected government has the (people's) authority to conduct government operations. This includes passing budgets and laws. The people of Wisconsin, elected 19 Republicans and 14 Democrats to their senate. The Republican majority is not due to a coup or an oppressive security force which dictated the election outcome. The Democrats lost because their story was not as convincing and their way of dealing with it: Walk away and stop a democratically and fairly elected government from functioning. We can blame the rhetoric of either side for causing this, but the bottom line is the same: Both sides are behaving like upset children at the playground.

Democrats and Republicans are both trying to define what it means to be American. Yet there seems very little interest in compromise or admitting that the other side may have a point. Partisan voting habits across the country illustrate that point clearly. I doubt the Founding Fathers of this nation agreed on everything when they were drafting the Constitution. There was debate and – ultimately – consensus. It is from this exercise that leaders in American society should take their cue.

John Gardner once said, "What we have before us are some breathtaking opportunities disguised as insoluble problems." No matter how challenging and how divergent the views, consensus must be  possible – it is the only option in a democratic society. But that is clear. However, one question still remains: Are there any true leaders on either side of the debate? 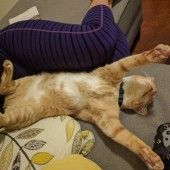 is a PhD candidate at the LBJ School of Public Affairs.

What a Crisis Taught me About Diplomacy