On September 15 and 16, 2015, one of the most famous University of Texas alumni returned to campus to promote his organization. Central Intelligence Agency Director John Brennan readily admitted that the CIA does a poor job of communicating its value to the American public, as evidenced by the fact that only 50% of the American public trusts the agency, 14% of Americans think that the CIA spread crack cocaine in the 1980s, and 29% of voters think that the CIA knew about 9/11 before it happened.

The public consensus seems to be that the CIA is terribly incompetent and vested with far too much power. Brennan said that he aims to be as open and honest as possible to address the “ignorance and misunderstandings” that have led to protests. Former Director Porter Goss implied that the more the public knows about the CIA, the more support they will give. “We need an informed electorate to elect congress members who will support intelligence,” he said.

The crowd that came out to listen to Brennan was mixed in their appreciation of the Agency. Protesters outside the Tuesday event chanted “Drones fly, children die!” and “No more war criminals on campus.” Inside the auditorium, a few protesters briefly interrupted Brennan by chanting “On trial, not on campus!” The first question was from a New Yorker reporter who asked if anyone at the agency had been held accountable for the media-reported mistakes the CIA made in the months leading up to 9/11. On Wednesday, those who asked questions seemed less interested in the President’s Daily Briefs being released and more concerned with recent security scandals. The questions ranged from Snowden (actually relevant to the National Security Agency), to Wikileaks (which leaked mostly State Department documents), and finally a man asking each member of the panel who killed John Kennedy, while the moderator struggled to get him to return to his seat.

Although all the panelists lauded CIA officers for protecting our freedoms and national security, the events were rife with acknowledgements that the CIA has made mistakes, and needs systemic change. Brennan responded defensively to the New Yorker reporter’s question, and protested both the media’s portrayal of events and the public’s clamor for a scapegoat. He said that the Agency has conducted accountability reviews of personnel, but that he is more interested in systemic changes to address mistakes and hold the entire system accountable. Former CIA Director Goss was more direct: “The fact that there wasn’t a public hanging or scalping doesn’t mean there wasn’t accountability.”

Brennan also played up the public service aspect of the CIA. After the Tuesday protesters left the room voluntarily, Brennan told the audience, “I am exceptionally proud to be part of an org that has allowed free speech to thrive in this country…At times like these I think of the 114 stars on the memorial wall at CIA headquarters, honoring those who gave their lives for our freedoms.” Admiral McRaven added, “No one does more to protect this country than the CIA. Anyone who forgets that needs to go back and check their history.”

McRaven’s comment hinted at the “us vs. them” mentality that has arisen recently as the American public has become more and more divided between those who respect tradition and trust authority, and those who view institutions like the CIA with suspicion and mistrust. Porter Goss explained in the Tuesday panel that the “spirit of American society” worked well after 9/11, when trust in the government and the CIA surged. In peace, he said, it’s harder because people go back to their “other agendas”, presumably any agenda besides national security. It might be true that the CIA enjoyed more support when the public felt most unsafe, but an understanding of what feminists, antiracists, and others are fighting for might actually help the Agency become a stronger organization. Many people believe that foreign policy begins at home, and that America must demonstrate commitment to principles of liberty, justice, and equality at in order to have legitimacy promoting democratic principles and human rights abroad.

Rhetoric criticizing “other agendas” that may or may not include the #BlackLivesMatter, government accountability, and reproductive justice movements alienate the very people the CIA is theoretically recruiting at events like these. Brennan seemed conscious of the fact that the composure of the panels – all older, white men – is part of why many Americans feel that the Agency doesn’t represent their interests. On Wednesday morning, he told an audience of mostly students that in 2013, the Agency conducted a study that revealed just how much the Agency lacks in diversity, both in its senior ranks and its recruiting efforts. Brennan said that in the studies, the Agency has found that women, people of color, and others don’t want a “free pass”, a phrase often used in criticism of affirmative action. But the Agency has recognized practices that make it harder for underrepresented groups to apply, get in, and receive promotions, and Brennan said he is working to correct those.

At each event, Brennan highly recommended a career in public service. “Intelligence work gets into your bloodstream,” he said on both days. “You feel you’ve been enriched and also contributed to this great nation.” He also said that his experience with the CIA has made him more empathetic and understanding. He  recommended that students interested in a career in intelligence learn as much as they can about how the world is changing.

So did Brennan succeed in reaching a new audience and convincing them that the CIA keeps our nation safe? Brennan, McRaven, and Goss are seemingly sincere men, who believe the CIA is a valuable institution despite its tendency to dwell in an uncomfortable gray area when it comes to privacy and human rights, and all received heartfelt applause.

But many remain unreached — and unconvinced — by the message Brennan brought back to a campus much-changed since his days in the Middle Eastern Studies department thirty years ago. The protesters outside his event on Tuesday never went inside. The questions at the LBJ Library event showed that releasing documents from the 1960s won’t satisfy conspiracy theorists. And based on the standing ovation he received before he even started speaking on Tuesday, it appears that, to a certain extent, he is preaching to the choir. 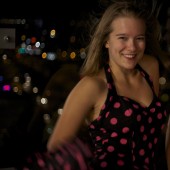