On September 12, 2019, qualifying Democratic presidential candidates hit the stage in Houston, Texas for the third Democratic debate of the year. The highest polling and highest grossing candidates faced off on hot-button issues such as healthcare, race relations, gun violence, immigration, and trade policy, among others. Running throughout the debate was the question of party unification.  A look back at the aftermath of the 2015 Democratic presidential primary reveals the value of such unity. Democratic candidates vying for the 2019 nomination have the opportunity to learn from the mistakes of those four years prior.

The unification debate emerged right from the start of the night. In opening statements, candidates faced the choice of whether to harp on the Democratic platform or to distinguish themselves from the crowd of the other candidates. Most notably, Amy Klobuchar centered her opening statement on the sentiment that “what unites us is much stronger than what divides us,” while Andrew Yang took advantage of his moment in the spotlight to promote his undeniably unique freedom dividend plan. The thematic tone for the night had been set.

When responding to questions on healthcare funding, the tone turned tense. Joe Biden tried to distinguish his healthcare plan from Elizabeth Warren’s and Bernie Sanders’ by calling out the second and third polling candidates’ for crafting plans that would raise taxes for the middle class. Warren retorted that the Medicare for all plan, although requiring increased public funding, would lower net healthcare expenses for everyday Americans by shifting the cost and decreasing the total. Warren and Sanders united to defend their shared support for the Medicare for all approach to healthcare. When Julian Castro chimed in on the healthcare debate, however, competition rose to a boiling point. Castro accused Biden of being inconsistent in his plan, of riding the Obama presidency wave, and ultimately of lying to the crowd.

Pete Buttigieg took the hostile moment as an opportunity to criticize the aggressive nature of the debate and establish his stance for party unification. Castro argued that combative remarks were an inherent aspect of the election process, and in effect instructed his fellow candidates to toughen up. Further, following the debate, Castro noted that this type of rhetoric prepares candidates for what it would be like to debate Donald Trump in the general election debates, as the president is unlikely to bite his tongue when things get heated.

The status quo is not the way to go here. The party must consider the events of 2016 in the aftermath of the presidential primary. By the time of Hillary Clinton’s nomination, the divide between Bernie Sanders’ and Clinton’s supporters had been cut so deep, that even when Bernie endorsed Hillary post-nomination and encouraged his supporters to get behind her, his attempt to redirect his crowd was unsuccessful. As many as 12% of Bernie supporters either forwent their right to vote in the general election, or virtually threw their vote away by writing in “Bernie” or voting third party for Green Party or Libertarian candidates. Further, an estimated 1 in 10 voters who voted for Bernie in the primary ended up voting for Trump in the general election. These disenfranchised Americans felt so strongly against Clinton, in part due to the hostility shown toward her candidacy pre-nomination. Many argue that Sanders’ voters are responsible for helping Trump win the presidential election. The deeply drawn Bernie/Hillary divide within the Democratic base contributed to the defeat of the party’s nominee in the general election.

Playing along with the broken political system that the president has only exacerbated is not the best approach for the Democratic party. Whether the party is united simply in order to defeat Trump, as seems to be Kamala Harris’ and Biden’s number one priority, or to promote real policy change for the better, coming together is a better approach for the Democrats in this election cycle. 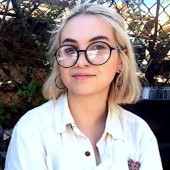 Claire is a first year Master of Public Affairs candidate at the LBJ School of Public Affairs. A lifelong Texan, she is passionate about the issues that impact the State of Texas, its unique ecosystems, and its diverse residents. Claire is especially interested in the applications of scientific research to public policy, with primary policy interests in environmental sustainability, reproductive justice, and nutrition.

Marijuana Drug Scheduling: Something We Need to Ask Ourselves